I was able to paticipate in an interactive heart dissection to observe the structure of the heart and the process in which blood flows through an actual active living heart. I was presented with a cow, pig, and sheep heart to compare and contrast the structures of each individual. Overall, the only difference between the three hearts was ultimately the size of the heart and the color of the surrounding muscles and tissues. The cow resulted in having the largest heart and the sheep had the smallest. Logically, the heart would have to be bigger for a bigger body because the amount of blood that needs to pass in and out of the heart, while contributing a steady blood flow throughout the entire body, can only be stable with a larger and stronger heart. This can also explain the smaller heart for the small sized sheep. 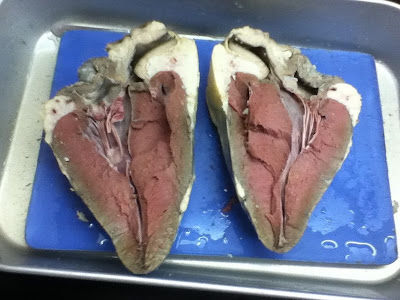 Above is a picture of a dissected cow heart which was dissected in this specific lab. Being able to actually see and dissect the heart has made it incredibly easier to understand the functions and structures of the heart.

After the heart dissection, I was able to use the microscope the view cardiac muscle from the heart as well as compare and contrast arteries and veins. Arteries had a thicker membrane than the veins. This is because arteries are the exit source of blood from the heart. The aorta is the largest artery in the entire body because this is where all the blood from the heart is being released and carried throughout the rest of the body. The membrane has to be thicker to be able to withstand all the the pressure that is forced upon its walls. Veins on the other hand are smaller do to the fact that blood is being returned to the heart through them. They do not take on as much force as arteries do. Above: To the left is an artery and to the right is a vein

Along with the slides of arteries and veins, there was a slide of an artery with atherosclerosis. This is a disease in which fatty materials and other substances begin to build-up on the walls of arteries and can eventually block off the blood flow and cause life threatening problems such as heart attacks.

In class we analyzed the heart with EKG to create a graphical recording of the electrical events that are occurring within the heart. With a healthy beating heart it was easy to see the five processes that create the beating of a heart. These five beats are labeled P, Q,R,S, and T. The P wave is the starting of the beat where an electrical message is sent from the nodes in the atrium to the ventricles. The QRS complex is where the ventricules contract and depolarize. The T wave is the repolarization of the ventricles back to its regular resting state. 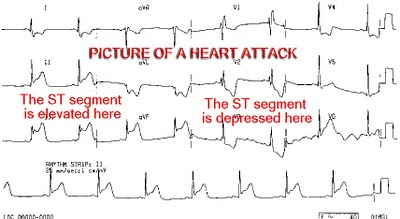 After recording the heart beats and anaylzing the data, I found it incredibly difficult to read EKG recordings of various hearts and try to find abnormalties or disorders. With time and practice it would become habit and instinct to recognize any abnormalty. Every heart beat is different, but some hearts miss the QRS complex which means that the electrical impulse sent from the P wave was blocked before it could reach the ventricles. This blockage could be caused by tissue injury from previous injuries or myocardial infarction. Recording the intervals between the contractions within the five step process allows us to detect the heart rate and allows us to see how long the heart is taking to react to the electrical impulses. 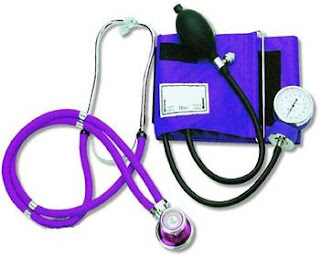 Above: Stethoscope and Sphygmomanometer!

Posted by Stephanie Brown at 12:24 PM No comments:

Posted by Stephanie Brown at 12:18 PM No comments: